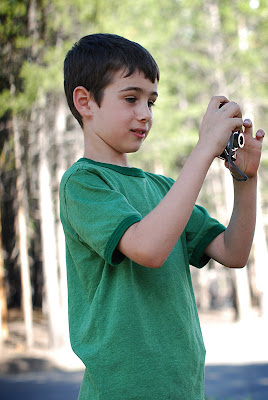 There's so much to tell in trying to recount our family adventure of two weeks . . . it's a little overwhelming! My intention is to create a photo book of the trip and blogging is my dry run in telling the story. I'm so glad that before we left, I created a separate photo file for the trip and then organized my photos by the day taken. It has created a timeline that I can refer to when I begin to get a little fuzzy on the details.

We met up with my parents, Nana and Papa, at the West Entrance to Yellowstone Park. We had thought we wouldn't meet until we arrived at the camp site so it was a pleasant surprise to share lunch at Buffalo Bill's and then drive in together. Big D had already been on the look out for Buffalo and he was gravely disappointed when they didn't magically appear immediately upon entering the park. He had to wait a whole day before his first siting. And we had to hear much talk, winging and whining about it until he did! 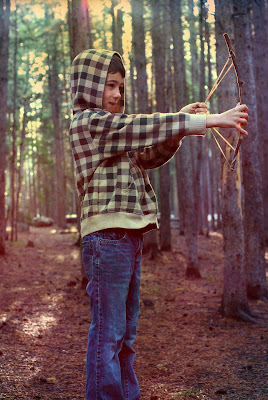 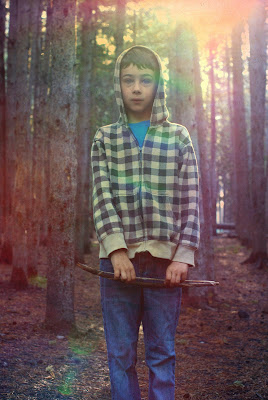 The first evening was perfect! Sunny, warm and dry. We set up camp and the kids ran around collecting and making stuff. Big D made a bow and arrow that actually worked. It was his pride and joy. We learned all about bears. Two quite recent news stories about attacks/encounters in the park had us adults on high alert. We were advised that all food, cosmetics, food containers and water bottles would need to be secured in our vehicles unless immediately in use. This made meal prep and our daily treks into the park an adventure. That and the mosquitoes were the only downside to a truly lovely camping experience. 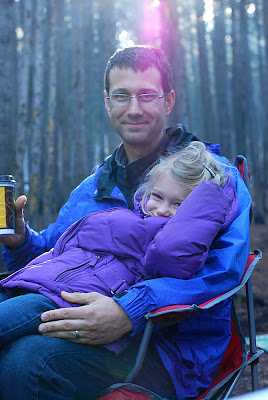 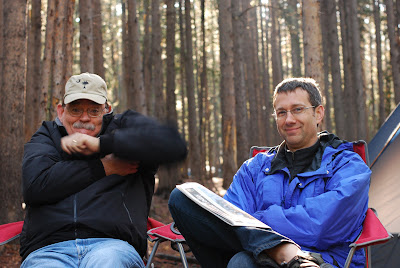 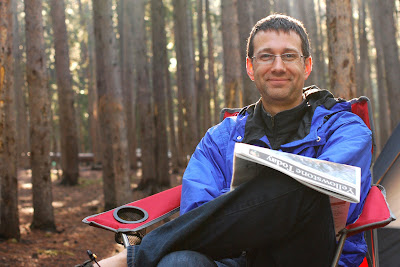 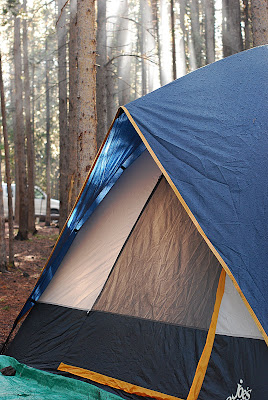 Just as we were preparing to make smores that first night, we had a doozy of a thunder and lightening storm. It was truly impressive! We laid in our tens and listened to the thunder roll around the mountain tops. Powerful. Fortunately, we stayed dry and by noon the next day, we had sun again. In the above pics you can see the tent drying out and the family huddled around the fire waiting for the sun to warm the camp. 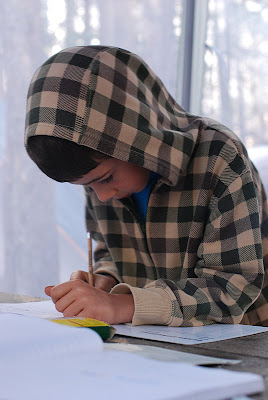 Before we left on our trip, the kids and I decided that they would keep journals of their adventures. As we traveled, we collected stickers and they took pictures with their own cameras so that they could add them to the notebooks. They kids also worked on their Junior Ranger badges -- as Big D is in the picture above. They were given a newspaper with activities and assignments. When finished, they were to talk to a Ranger, take a pledge and the receive their badge. Serious business, folks! 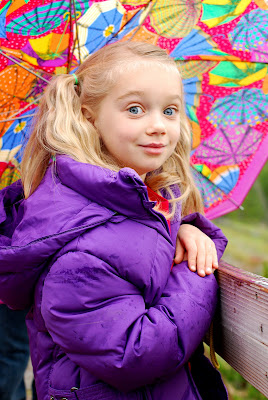 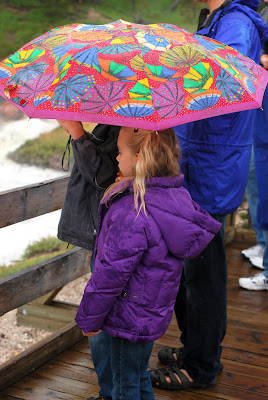 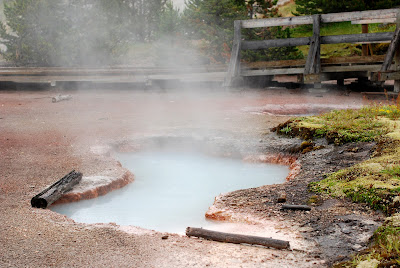 A drippy start to the day as we checked out the Paint Pots. Kids were good sports and, like I said above, by noon it was warm and sunny. Just in time for Old Faithful. 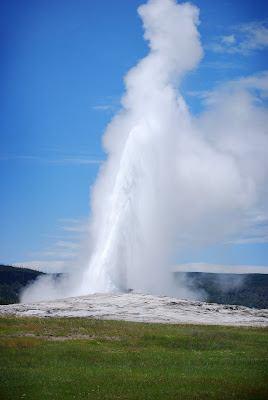 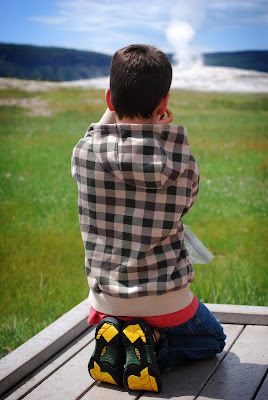 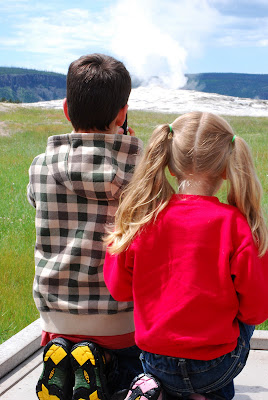 Big D was determined to get a shot just as Old Faithful erupted. He stayed poised and ready for 15 minutes before hand. Then when it "blew," he was upset that maybe he wasn't getting the "just right" picture. Poor little man. Mama tried to tell him to relax and enjoy the moment. Plenty of pictures were being taken and I promised we'd share! 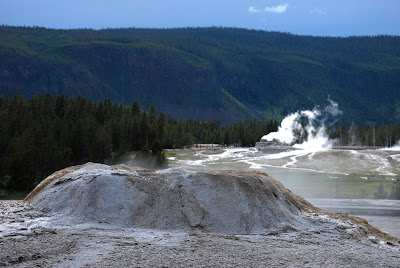 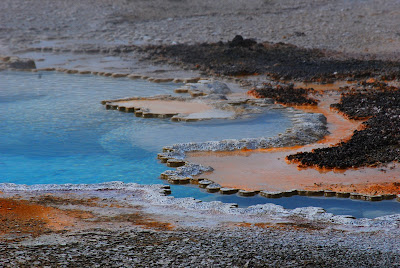 The landscape is so unusual and frankly, stark at times and lush at others. I can only imagine what it would have been like to stumble into this valley years ago. We were respectful of the wildness of the place and horrified to see other visitors rather carelessly move through the park. My dad had been reading a book about the accidents and deaths that have occurred in the park -- the vast majority out of a lack of respect and understanding of both the animals that live here and the natural phenomenon. Falling through the thin crust into boiling hot springs, approaching wildly unpredictable buffalo . . . 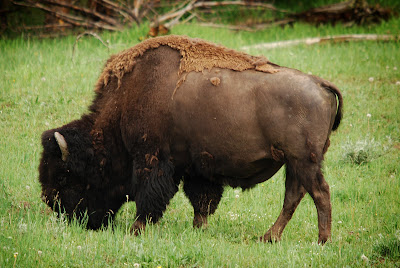 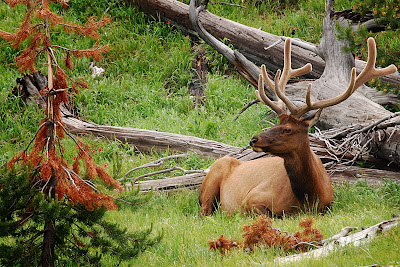 Photos make look like close ups be trust me, respectful distance maintained! My uncle lent me his super huge telephoto which was an adventure in itself! We saw a staggering array of wildlife throughout the trip: buffalo, grizzlies, elk, prong horn, beaver, bald eagle, osprey -- to name a few. 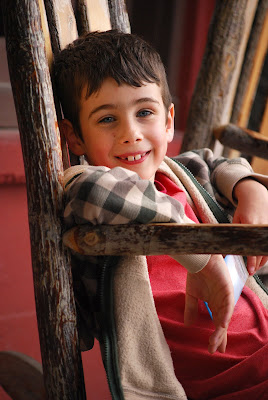 Big D chilling in the rockers in front of the General Store -- already fantasizing about that evening's smores and campfire. Good times!
at 7:23 AM