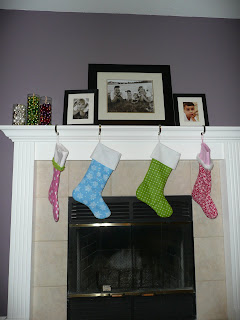 If my last blog was a wee bit long in coming, this one is inexcusable. However, I know you'll pardon my slackness since certainly you've been caught up in the chaos that commences with Halloween and barrels on through the New Year festivities. Is it just me, or does it seem as if there is a shorter period of time between Thanksgiving and Christmas this year? I thought I was being surprisingly proactive by beginning my holiday shopping before T-day and lo and behold, I still feel as if it's possible to be dredging the malls for last minute buys. YUCK! Don't get me started on the sheer hell that it is, at least to me, to be shopping in the last week or so before Christmas. I seriously considered postponing Christmas, or at least the gift opening part of it, until a couple of days AFTER the 25th. Just think of the bargains? But I digress. In brief, let me hit the highlights thus far for holiday season . . . .
Halloween -- I believe I mentioned in my last entry, a birthday costume party. A long night of frantic and not so skillful sewing produced a cute cowboy uniform for Big D. Hannah wore a recycled chicken costume. They were ADORABLE. Being the graceful and adept family that we are, we were the only ones to be swarmed (maybe not "swarmed" but certainly attacked!) by hornets while out in the field watching the horse . . . Yep, I took two stings for the team but we successfully prevented the kiddos from being stung. On Halloween itself, we had all sorts of unplanned events, including a trip to the pediatrician, so the kids hit a couple of our neighbors' houses and we called it good.
Thanksgiving -- The big meal was at our home and besides my spouse and offspring, my parents in law were in attendance. It went well -- everything was cooked through, tasted good and seemed enjoyed. AND I don't think I was a complete terror of stress and irritability. Though it's possible that I contained it so well that it was manifested in hives that evening. There could be a totally less psycho explanation:)
Christmas (the beginnings of) -- Our ritual is to break out the Christmas carols and decor immediately upon stashing the Thanksgiving leftovers. True to form, we had the tree up and the lights on the house by Friday night. On Saturday we took the kids to the Zoo Lights, another tradition, complete with a train ride. And Sunday found the kids building and decorating their first Ginger Bread house with the grandparents.
Being "crafty" -- as in making stuff -- is also a Christmas ritual for me. I long to be like some of the talented women whose blogs I follow! For example, I love the photos and inspired ideas on Meg's page. Makes me drool! In her entry today, she mentioned wanted to make felt garland so of course I googled that curious idea and found wonderful ideas. The debate is now whether I make my little heart happy cutting and sewing felt circle even though I'm unlikely to get much done before packing up and heading south for Christmas or do I save the idea for next year? I did do a little crafting . . . I made some stockings for the mantle. I really liked these from Pottery Barn Kids, but come on, who can buy these things? So I did my own thing and I'm liking the results -- just need to add some pom-poms to the blue and green stockings.
On a related note, did I mention my birthday fell during Thanksgiving week? Yes, it did and I was pleasantly surprised to find that all year I had mistakenly believed myself to be 33 years old when in actuality, I just turned 33! I got a whole extra year, people! I mention this because my husband bought me Photoshop Elements for Mac. A whole new level of craftiness is about to commence. I'll post my first attempts at scrapbook pages for your humor:)
at 12:05 PM 1 comment: