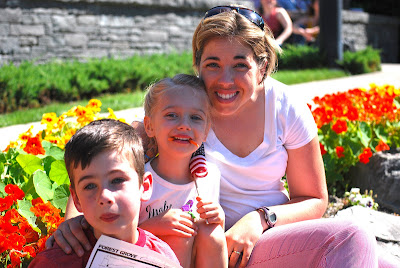 We had quite the day yesterday! Began by attending a local parade with one of Big D's friend's families.   The parade was excellent. The drama wasn't. But first, let me tell you how beautiful the day was! Sunny, warm and a light breeze. Couldn't have custom ordered better weather. Now the drama . . . 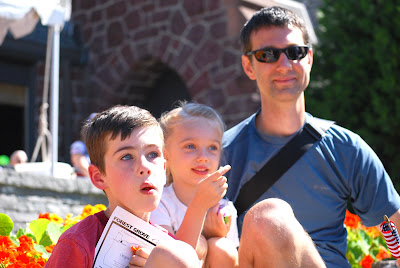 Like most parades, no doubt, folks had "reserved" prime sidewalk turf the day before with tape and chalk. We knew this and weren't concerned. We figured that we'd find a place to stand and watch as we hadn't planned any further ahead. When we arrived, the other family had set up chairs on the sidewalk and we joined them on the curb. Little did we know that they had taken over part of another family's spot . . . a large, aggressive family, it turns out. This woman approached us and began swearing and insisting we had to leave. The mom responded that she would go find a police officer to solve the conflict at which point the other woman said she'd "assault" her in front of the officer. Hmm. I decided that this kind of language and animosity was not part of our family's parade plans and we quickly moved to the back. We watched from our perch on a lovely embankment (we had a great view, by the way) as the two women and the police officer "discussed" the difficulty. Once he left, the other woman's family essentially surrounded our acquaintances and made all manner of snide comments. They scared the children. Clearly their goal was intimidation. It felt unsafe to me and unnecessary. 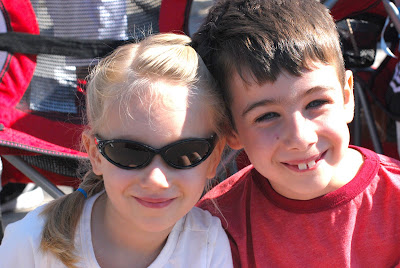 Our little family made the best of it, enjoying the parade. Big D was tearful as he wanted to hang out with his buddy but eventually the other family joined us. I don't know why they didn't do it sooner! No point in "saving face" when you are in the wrong and your children are scared! 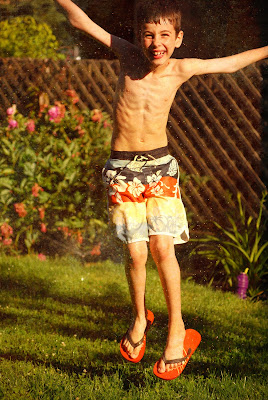 After a lovely lunch at home and a nap, the kiddos played in the sprinklers in the backyard. It was a little chilly in the breeze so that didn't last too long . . . but long enough to snap some fun pics! 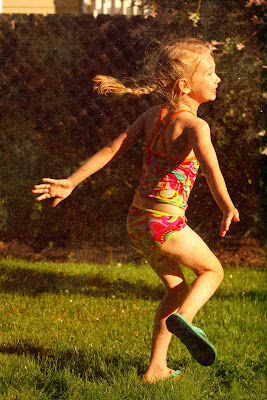 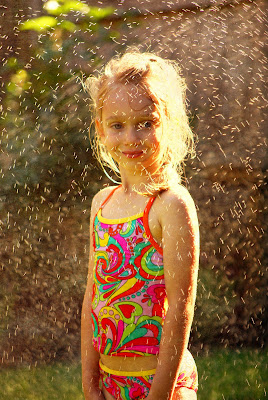 We barbecued lots of veggies -- butternut squash, peppers, beets, onions and tofu. Yum! We ate them with millet and a homemade dressing. Then we had our own little fireworks show in the driveway. 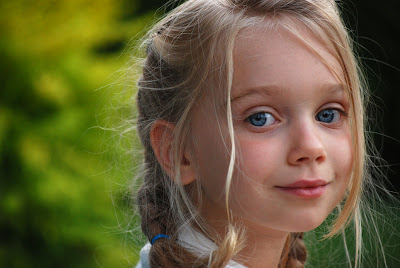 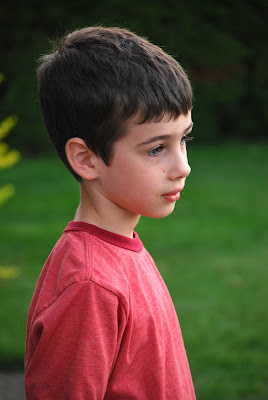 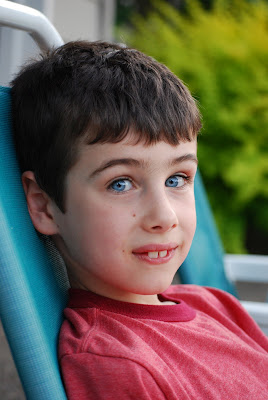 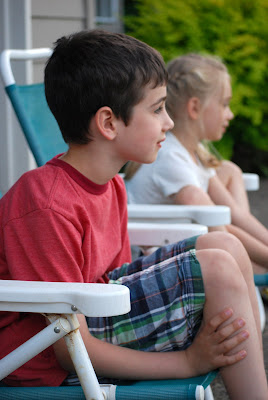 The kiddos were super jazzed. Lots of oohs and ahs . . . our neighbors went crazy with massive firecrackers that went on until 11:00pm. Little Sis fell right asleep and wasn't bothered at all by the noise. Big D, on the other hand, had a tough time and ended up in our bed until it quieted down. 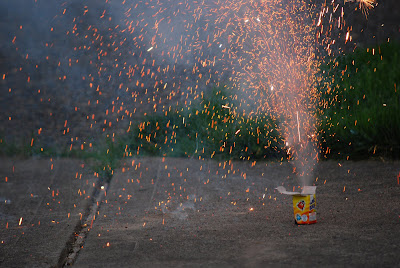 It was a wonderful day. Full of variety and fun. Each year gets better and better, as the children are able to enjoy more of the festivities.

Day 3 "ish" of the Summer Challenge 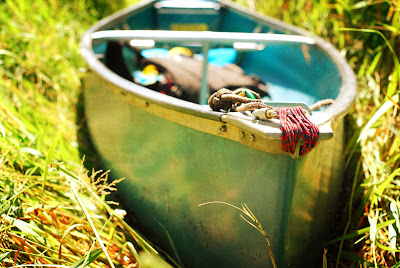 Hi again. Twice in one day. Must be a Mama Mutterings record! Today marks the first canoe adventure of the season. And what a wonderful day it's been! We had a wee portage to our launching site. Don't I sound knowledgeable and sea worthy? As you can see below, we essentially carved a trail by dragging our canoe through thick and tall grasses. 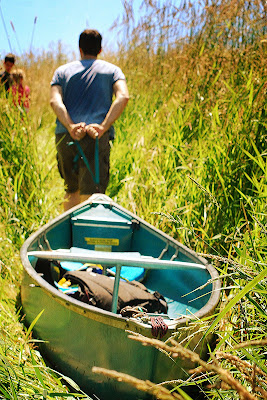 Quick before I forget, let me tell you about all the amazing wildlife we say -- a baby raccoon at the side of the road. So wished we'd pulled over so that I could snap a picture. Small, fluffy and very, very cute. Unfortunately, it was a narrow road with no shoulder. Bah:( We also saw a Bald Eagle nest perched on top of a telephone pole with what looked like babies. Are they called chicks? Finally, an Osprey dove and caught a fish while we were watching from our canoe. Awesome! 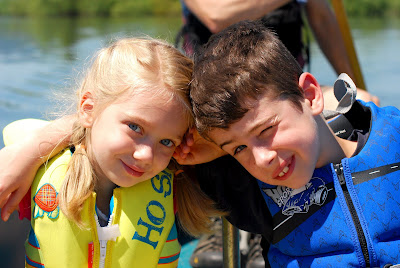 Kids did reasonably well. They both seemed to think there was nothing new to see because we had been in the lake before and yet . . . note all the above wildlife features we saw! Silly nillies. 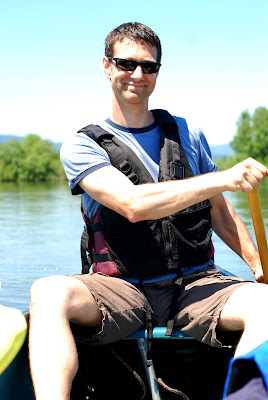 The man aka propeller at the back of the canoe. I sat in the front, lounged and took pictures, paddling occasionally. 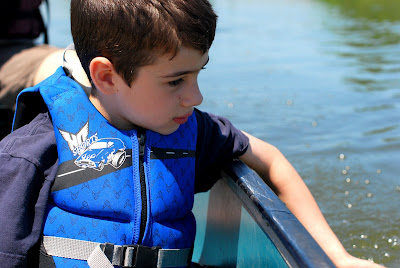 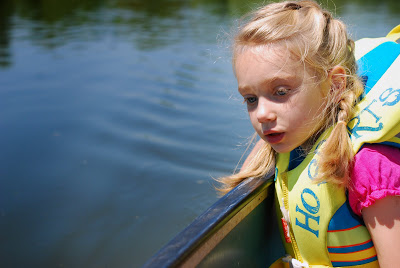 Where we were we could see three mountains -- St. Helens, Hood and an unidentified third. Hubby has all sorts of guesses but we're relatively clueless. Adams? 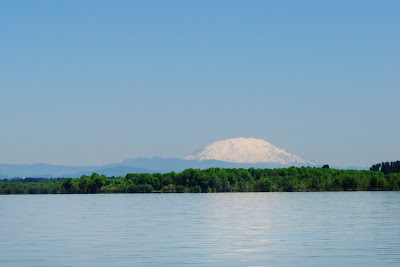 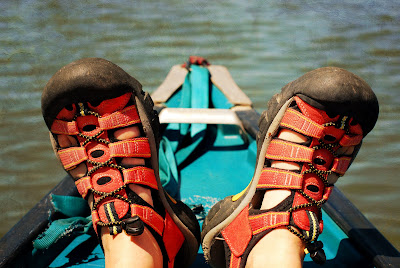 Here's the photographic evidence of my presence on this trip. Relaxed toes, cool shoes and a beautiful sunny day!
at 7:42 PM No comments: 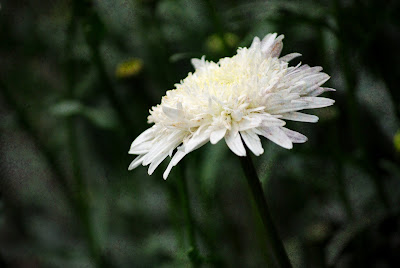 Alright, so I haven exactly managed to take and post a picture each day . . . I maybe should have set the bar a little lower. Or in incremental steps! Like a photo every "couple of days" to be determined by the photographer :) I dashed outdoors one morning (not telling when exactly these delinquent pics were taken!) before getting showered for work and snapped these pics. I'm sure the neighbors enjoy the spectacle -- pj's, flip flops, and camera in hand. 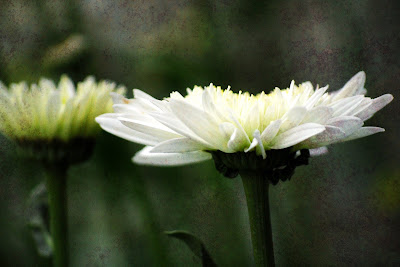 I may be cheating a bit. I fixed all manner of errors in PS proving how badly I need to practice, practice, practice. I say that not in the frustrated manner of a young child told to sit at the piano for 30 min every day whether they like it or not. Truly. I love the process and tinkering and, more than anything, the beauty of seeing and creating. 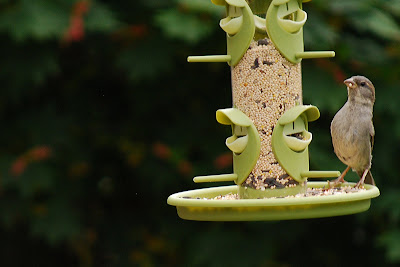 Don't you love the way this bird seems surprised mid-bite? It might be that he is startled to find a humanoid out and about at the ungodly hour of 6:30am . . . 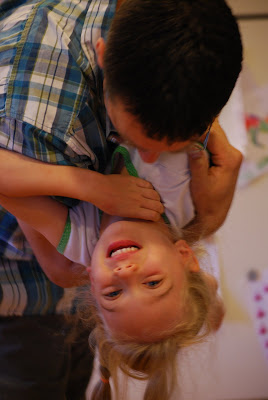 These last two are in their unprocessed glory. My sweet muffin and her daddy playing before he leaves for work. Of course they were coached to repeat this playful act a couple of times while mama remembered to change her menu settings for florescent lighting!

So looking forward to the long weekend! Time with family, watching a parade, a few fireworks. And getting ready for the "big trip."

How will you be celebrating?
at 7:33 AM No comments: